In May 2018, Healthwatch Greenwich used our power of Enter and View to visit River Lee Care Home.

Riverlee care home is located in Franklin Place, and is managed by the service provider Sanctuary Care Limited. Riverlee has 75 beds across three floors, and primarily specialises in dementia care of frail elders who require both nursing and residential care. On the day of our visit there were 66 residents; around 45 with dementia and nursing needs, 15 with dementia needs and 15 with general nursing needs. On the day we spoke to six residents, who had varying levels of communication and understanding/ comprehension.

On 29 January and 1 February 2016, the Care Quality Commission (CQC) carried out an unannounced comprehensive inspection of Riverlee nursing home. This followed an earlier inspection on 14 November 2014 which found two breaches of the Health and Social Care Act 2008 (Regulated Activities): they found that people were not always protected from the risk of abuse, and that premises were not always kept clean nor adequately maintained. The inspection in 2016 found that both these issues had been addressed and the service was rated ‘good’ across all areas.

The home itself is tucked away on a newbuild estate. The reception building is not easy to find as it is indistinguishable from the surrounding blocks of flats and not particularly well signposted. The close itself is pleasant and quiet and the home has attractive potted plants around the front entrance.

Access to the building is secure, and the entrance door is controlled by the duty receptionist via a call bell and a speakerphone. The activities co-ordinator answered the door and we later met the duty receptionist who was friendly, helpful, and appeared to assist residents and visitors quickly. There is disabled access to the building, and a visitor’s book to sign in as you enter.

The initial reception area was pleasant but very small given the number of people who were passing through it from one part of the home to another. Additionally, there was only one seat available, which had to be manually moved by staff to allow wheelchair access. The communal corridors also felt quite cramped given the numbers of people walking around, with residents being assisted to go to the bathrooms or walk to the communal areas. Furthermore, there were boxes left out in some communal spaces on the ground floor, making them potential trip hazards difficult to navigate especially for those with impaired vision.

The main activities room on the ground floor was large but felt very cramped and cluttered as it was storing a lot of unused furniture and equipment, and it was quite dark. We were told that equipment was moved into this room from the hairdressing salon on a Wednesday (the day of our visit), hence the stacked chairs and other excess furniture.

There were noticeboards with information on display, although these were slightly cluttered and in need of rationalisation. Each floor had a daily activities board on display, with large, interchangeable pictorial cards of activities, although some of these appeared to be out of date.

There was a strong smell of urine mixed with chemicals (potentially from the salon) in many areas of the home, primarily in the corridors. The practice manager assured us that they would soon be changing the carpets to laminate flooring, as successive attempts to deep clean them had not proved effective.

We felt that there could have been better signage throughout the home, in a larger font and against a contrasting background. Additionally, not all rooms had a picture explaining its function

Dining areas were adjacent to the communal lounges, and were tidy and well kept.

The communal lounges were well-decorated, carpeted, with had high-backed chairs and patterned curtains. In one of the lounges the TV was playing quietly, and most of the residents were taking part in a communal sensory activity with a care assistant.

The toilets in the home were clean and well-kept, but we noticed that one was without handrails.

The home has a small useable garden space at the back with a few tables and chairs in the shaded area. The rest of the fenced-in garden was much larger, but the different levels could present a trip hazard to residents already unsteady on their feet. If levelled out, there would be a much greater use of the space; the activities manager told us there were plans to do this over the coming year.

The residents’ rooms open onto the main corridor. All are ensuite and of a decent size. The ones we saw had large windows which let in lots of light. Residents are encouraged to bring in small items of furniture and personalise their rooms with mementos and photos. A picture of each resident along with their own memory box is displayed outside of each room.

There is also a dedicated room set aside for visitors in case they wish to stay over, but this was out of use when we visited and was currently being used as a storage area.

The dining tables were set when we visited and there was a daily menu on each one. The writing on the menus was quite small but we were told that residents were offered a visual choice of meals at meal times and so were not reliant on the paper menus. The activities manager also told us that he had previously designed pictorial menus for residents who spoke English as an additional language.

We were told that the home has a chef manager, a deputy chef and three catering assistants. The practice manager informed us that the chef decides the menu and food options with residents and their relatives so that it reflects their preferences. If a resident does not want any of the meals on offer that day, the chef is willing to prepare an alternative.

We were told that Sanctuary Care run a residents and family feedback survey which is done yearly. The home also collect feedback via the website www.carehome.co.uk. There is a comments and complaints box placed in the reception area. The manager also explained that staff try to engage residents as much as possible in the day to day running of the home, and consistently ask for residents’ and relatives’ input.

The home also holds quarterly relatives meeting, the attendance for which we were told has improved over the last few months. The minutes of this meeting are shared on the home’s noticeboard and with relatives who are unable to make the meeting. Some staff members also attend the meeting.

Overall, the residents at Riverlee nursing home seemed comfortable and well-cared for, although we were not able to speak with many in-depth. The staff appeared approachable and caring, and attentive to residents’ needs. We were primarily concerned about the strong smell around the home and the clutter in communal rooms and corridors. We suggest the home look at addressing these issues. 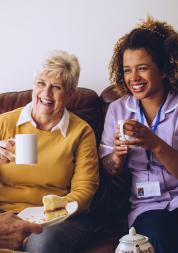